During this whole meditation thing, my mind has been bouncing around like an insane immature monkey on crack (appropriately called "monkey mind" by Zen Buddhists), which is normal, according to Jon Kabat-Zinn. However, my monkey mind is apparently extremely crafts oriented and I've come up with some brilliant design ideas while meditating.

Monkey mind then decided that what we REALLY REALLY needed were lots of markers. HUNDREDS of markers. And the color orange.

Georgia, monkey mind and myself trooped off today in search of art supplies. I didn't really want to trek into Manhattan again today (we were all over Union Square/LES yesterday, the trains are running local in both directions - UGH) and when I looked online at Dick Blick and Utrecht their markers were very expensive. 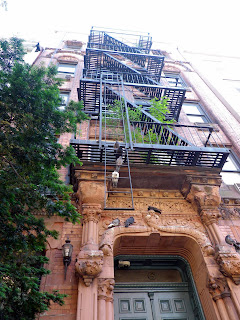 Pigeons on a building somewhere on St. Mark's Place in the LES. The ones on the fire escape latter really cracked me up.

I gave Target a shot online, and found that their markers were cheap, but no stores in the area had the cheap plentiful marker set and monkey mind did not want to wait for markers.

We started with Shipman Stationery on the Grand Concourse. On our way down, we discovered a stand that sells MAC makeup for cheap, a stand that sells Mavi (this weird fermented drink that Bruce fell for in the PR), a music instrument store that I'd forgotten about and a cheap SLR camera bag (on sale for $5!) at Staples.

Shipman didn't have what we needed which is unfortunate, because I like that store.

We then hopped on the subway to the Gateway Center near Yankee Stadium for Michaels. I'd forgotten it had opened. And boy is that a dangerous place for me to go. I have been completely deprived of craft stores since we've moved to NYC (was totally spoiled in Virginia, with a Wal-Mart, Michael's, Home Depot and Joanne Fabrics all within spitting distance of each other) and Georgia hasn't really had any experiences with craft stores. Poor kiddo.

Anyhoo, we got markers (100 for $20) water color pencils, paper, a mandala coloring book, and tape for Bruce. We also fondled yarn twice, examined every last inch of the kid's craft section at least three times and tried really hard not to spend more than we needed to. It was an effort. I could easily blow a couple hundred in there without thinking about it too hard. Clothing? feh. Craft supplies, HELL YEAH. 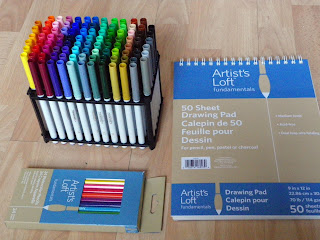 sexy sexy markers
After our Michael's experience, we headed off to this really enormous thrift store across the street from the old Yankee Stadium, appropriately called "Thrift World." Go figure. It's dark and dank and depressing, but huge and full of really great stuff. I picked up a bunch of books, including a coffee table book about Jim Henson's Workshop for about $8 bucks total, and I also got this skirt for $5: 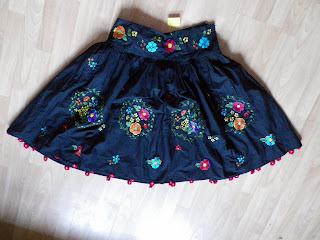 
And finally, since this is a knitting blog (allegedly) I have some progress pix of the Cinnamon Grace: 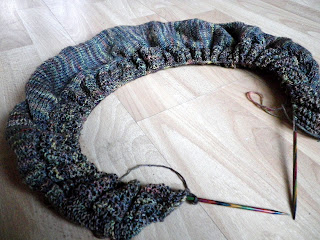 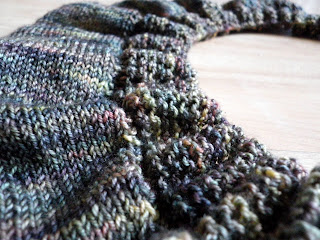 Almost done. Tonight I'm going to start the process of a picot bind-off for approximately 1,000 stitches. This is going to take forever, methinks.

Overall I'm pleased with the knit, although there are a few spots that I would like to redo. Unfortunately they are in the very beginning, so I'm just going to have to live with how it looks.

The lacy ruffle is really pretty, and I can't wait to see how it looks when it is done. 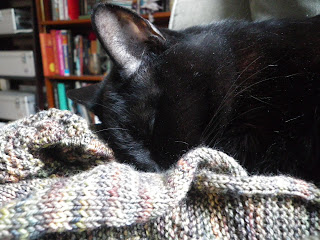 I put down my knitting for two seconds and look what happens...
Posted by Virginia G