Sunday Pix and an actual FO!

Howdy! After a short break this week to deal with the insanity at work (which happens fairly frequently) I'm back.

I finished the Lisel. Here are a couple of shots of it. I haven't blocked it yet. Still haven't really forgiven it/myself for it not turning out how I wanted it. And I tried to get some shots of the super cool picot bind off (which, incidentally, I was also doing wrong, but I didn't realize it until I was nearly done with one sleeve so I just kept doing it incorrectly. Still looks cool) but I haven't washed or blocked it yet, so it's not really coming through. And one of these days, I'll actually get a photo of me wearing the silly thing. 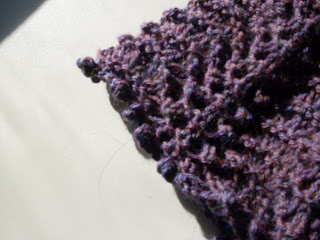 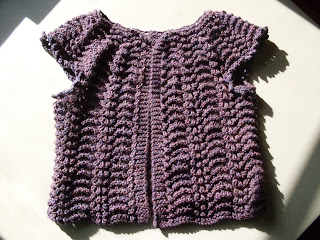 And here's a photo of the scarf that I'm working on. It being 5 degrees here kinda spurred me to actually finish the stupid thing instead of futzing around with designs ad nauseum, so I'm just improvising a pattern of dropped yo and garter stitch. It's very squooshy and thick, which rocks. Can't wait to wear it. Will probably be done with it this afternoon.

I did about 3/4 of it last night watching Pirates of the Caribbean II (whatever the subtitle is) with Bruce, which was good fun. Really, how much better can things get than Johnny Depp in eyeliner and things blowing up? The movie didn't seem to have much of a plot, though. Ah well. 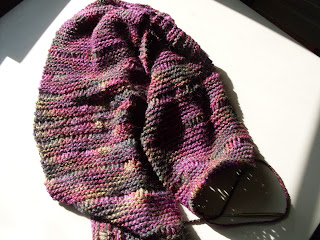