Well, I got busy. Things happened. Some more stuff happened, including knitting, and then, late last year I decided to start dyeing yarn and selling it. Here's the front page of my site: 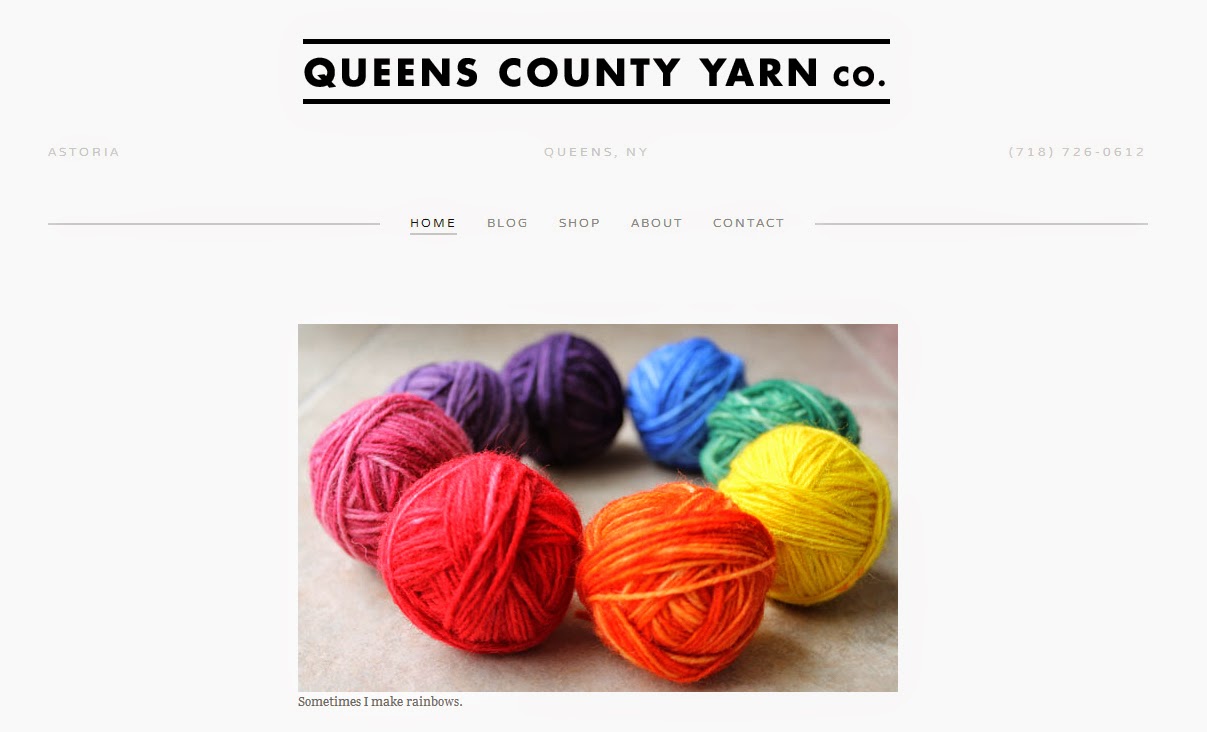 You can find it at queenscountyyarncompany.com/ I even have things for sale now, amazingly enough. :)

Anyway, I'm blogging over there, about the dyeing process, starting up a new company.

It's been a total blast! And, of course, you can always find me on ravelry.

I'll probably not be paying too much attention to this blog for a while, but I'd love to hear from all of you!

All Rivery was it.

Moose Rivery, that is. I knitted one: 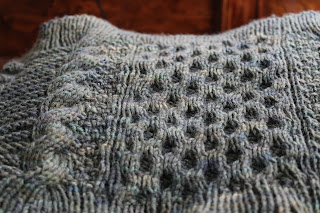 It's unblocked as of right now, but that hasn't stopped Bruce from wearing it. Also, this color is not representative of what it looks like for reals. It's a lot greener.I'll get some action shots after I've blocked it.

The pattern has got reversible cables, which I'd never knitted before, and they're genius. I love them. Also, the pattern is incredibly well written, and really sexy.

The title of the post was inspired by this lovely short film of Joyce & Beckett playing golf (warning, contains a lot of language. Foul and filthy. It's brilliant):


I'm also knitting an Avebury shawl by Kristen Kapur. I just happened to have the exact yarn in the exact quantity that she called for in the pattern, and I've had it for a while and have been debating what to do with it, so, it called to me, and knitting it I am. Simple, elegant, and the yarn (Alchemy Silk Purse) is DIVINE. 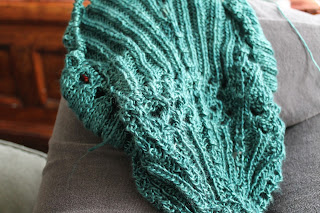 Two other projects I forgot, mostly because I can't breathe

The other two projects knitted since I last posted during the time of the hurricane (give me a break, I can't breathe, my face hurts, and I should probably be in bed, not blogging in a crackheaded manner):

Chandial Cardigan (which was my Rhinebeck sweater this year, my first!)

Picture of it blocking. Blocked the part on the right in the photo. Left half is unblocked. I have worn this sweater to DEATH this winter and LOVE it. Love. Love love love. 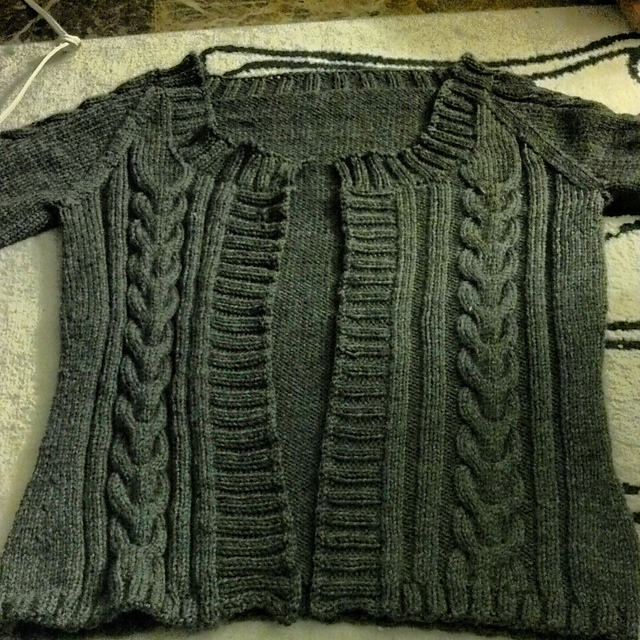 Also, the September Circle I mentioned in the post below, that I knitted the Etta hat to go with: 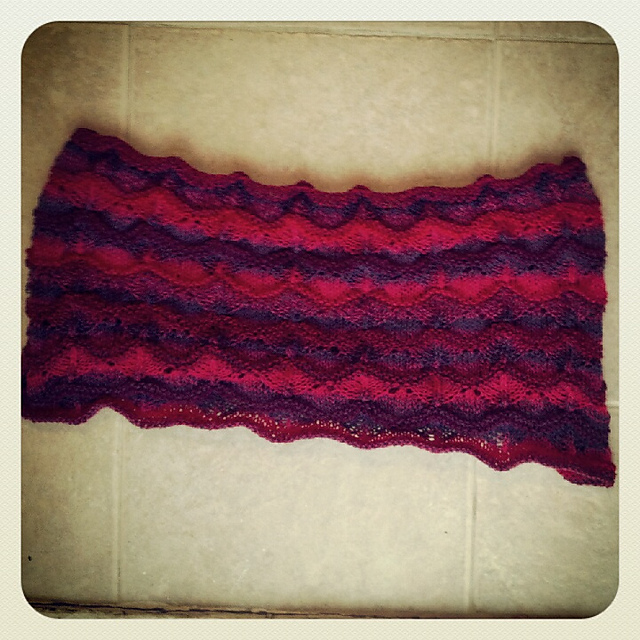 So yes. I'm alive, more or less. I have a cold, so I'm staying at home, and I'm finally at the "bored of being sick and sick of being bored" phase, rather than the "OMG, my face feels like it is going to explode and I want to die" phase. This is positive. This also means that I'm catching up on the blog and on some sadly neglected blocking (sorta) and photography.

The hurricane. We survived, didn't lose power, didn't have any issues. Lots of other people in the area were badly affected though, and we're still seeing major problems with the recovery from it. Where I work in the Financial District, there are large numbers of buildings that are still without heat, power and telecommunications, which has made the area... weird.

I finished some mitts for my friend Brady, with yarn that she got at Rhinebeck (wow, just realized I still haven't photographed my Rhinebeck purchases. eep). Still haven't given them to her, because we keep being sick when the other isn't, and don't want to wander around and ensicken each other, as that would suck. But they're here, and waiting for her: 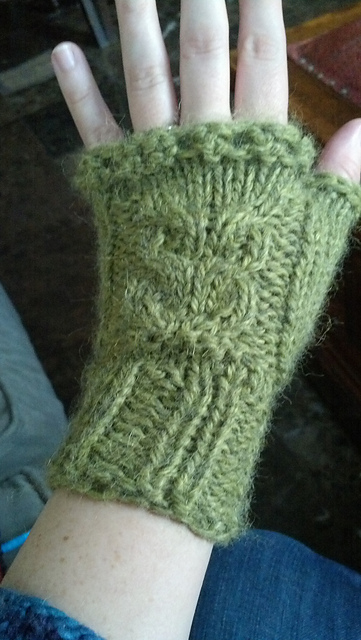 Then the holidays happened. They were good. Short declarative sentences. Ha!

During Thanksgiving I finished my Color Affection shawl, which, while I love it, completely killed any and all desire to knit, for like, a month. It sucked. It is a sucky, sucky knit (for me. I know other people love it) and all that garter stitch made me want to poke out my own eyes. Or somebody else's. But it was good to knit on while I was having family togetherness time and pretending to pay attention to what other people were saying. Ok, to be fair, I was actually paying attention to what other people (extended family members. Of course I was paying attention to you, Bruce. And Georgia.) were saying, because the knitting was so boring. I probably should not be giving away all of my secrets right now. Oops. I just blocked this shawl today. and by blocked I mean, got it wet and then dumped it on top of a radiator to dry. I still haven't really forgiven this shawl yet for being such a boring pain in the ass. I'm not sure I ever will. But I spent so much time on it that I don't really want to give it away, and I like the way it looks. It's a dilemma. 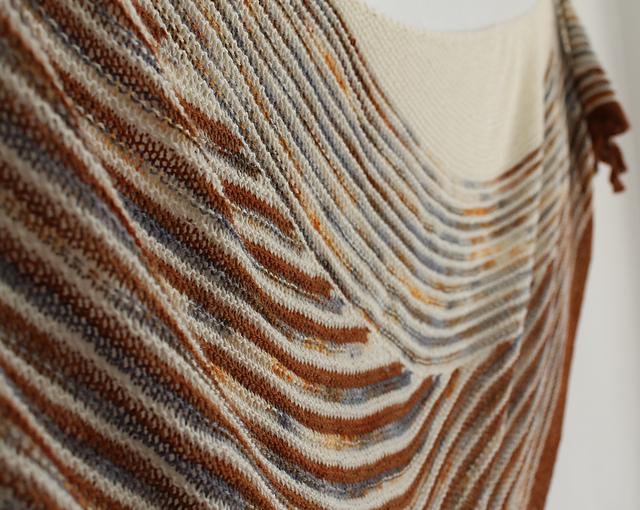 Then I knitted Bruce some socks, out of this: 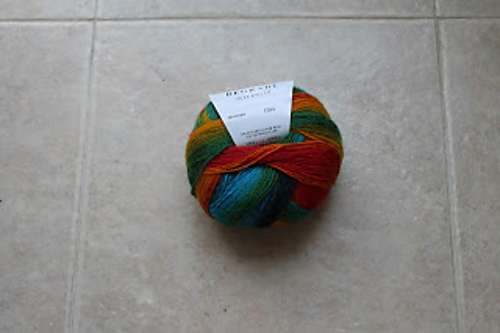 Which is Lang Yarns Jawoll Magic Dégradé, from my birthday yarn stash from Webs. It was fun to knit with, although there were a bunch of knots in the skein, which pissed me off. Other than that, they were uneventful, and I don't have photos because of the aforementioned backlog, plus Bruce's feet aren't here in the sunlight to take pictures of the socks on, which is another issue. Just use your imagination.

After that was a hat for me, because I wanted a purple hat to go with my September Circle. Here's a picture of me all sick today wearing the hat. 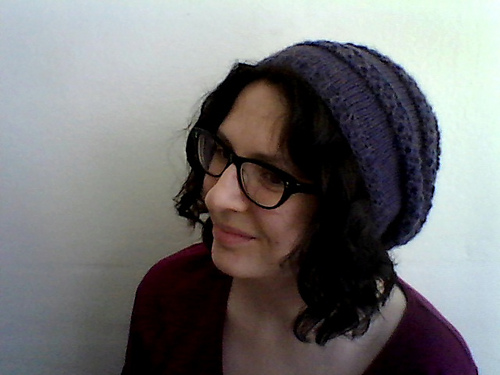 And lastly, my friend Meredith, for whom I have knitted other things (because she's awesome and a great appreciator of handknits), brought me some lovely baby alpaca yarn and asked me to knit her some stuff. So what did I do? More garter stitch. But it was for the hat. So it was super fast. And didn't involve interminably long rows like the effin Color Affection. Sigh. Anyway, here's the hat (with me still sick in it.): 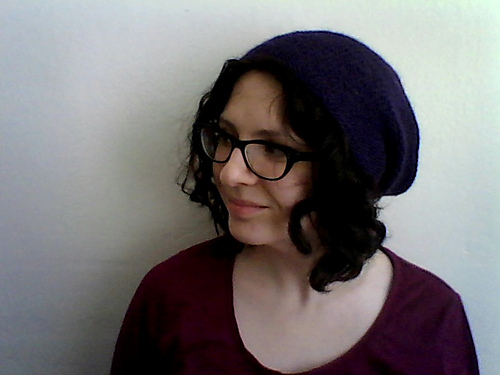 And I made her a Honey Cowl out of the same yarn: 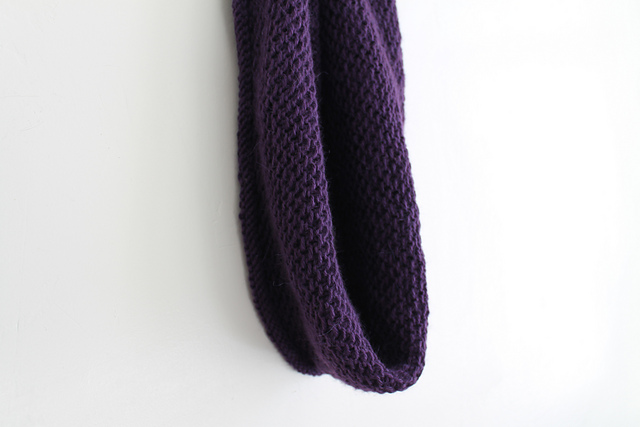 That is the softest alpaca yarn I have ever used, and didn't itch like every other alpaca yarn I've knit with and/or worn. So, recommended, if you can find it.

That's all. I'll get to my end of the year round up post in March, maybe. Heh.

Also, will be stopping by and checking in on everyone else's blogs soon.

Just a quick update to let everyone know that we're doing fine. We didn't lose power, and we're quite warm, dry, safe and happy. I'v'e been merrily knitting along during the past few days, and it looks like that shall continue, as my work is still without power.

Soon, I'll post an update with news about Rhinebeck (!), some FOs, and other good stuff.

Best,
V
Posted by Unknown 4 comments: Links to this post

The set, for Katie

Here's the hat and the loop (finally blocked) that I made for Katie: 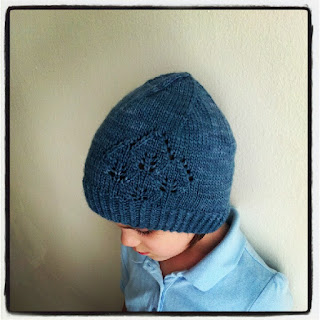 And the Vine Loop (on the poutiest model ever): 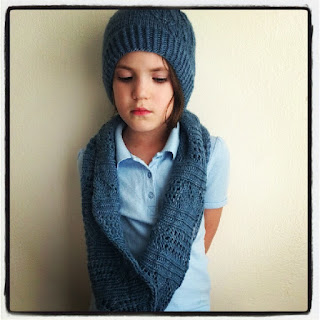 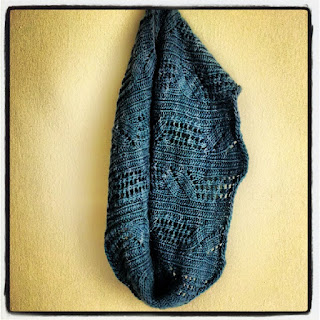 I immediately cast on for a September Circle, because apparently I'm going to knit everything by Melissa LaBarre, EVER right now.
Posted by Unknown 4 comments: Links to this post

I made this loop for my friend Katie. It's another one of those patterns that I SWEAR I will make for myself one of these days, and it's made all the more shameful by the fact that it literally takes NO TIME to knit.

Also, I have the yarn to make myself one. Just hasn't happened yet. I am a slacker. Or something.

Here's Katie's loop unblocked (and me looking grumpy in it): 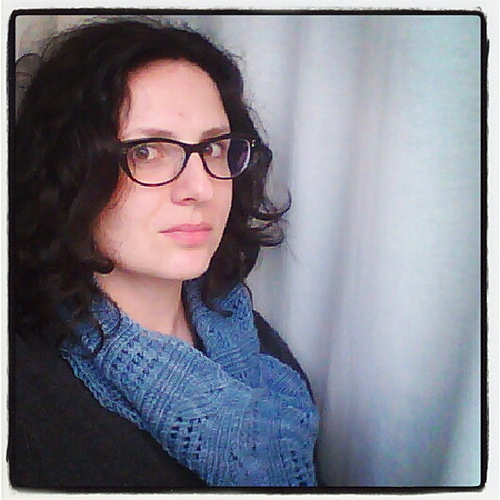 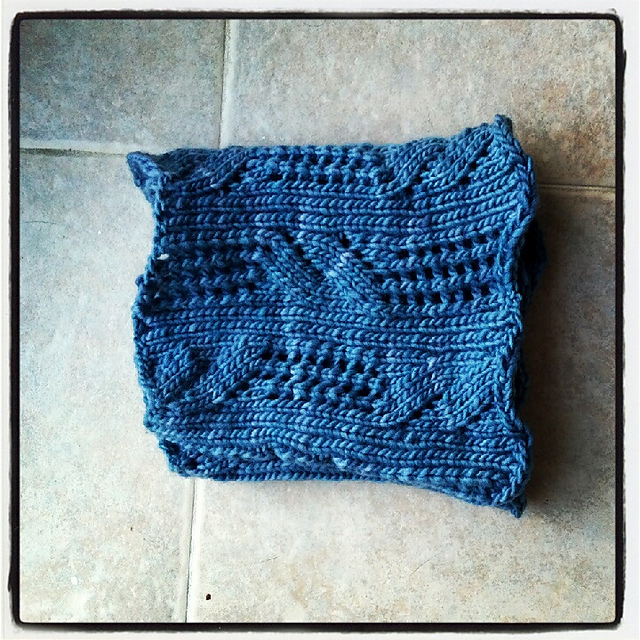 Modifications: Katie is rather petite, so I shortened the overall size of this thing from 54 inches around (which probably would have reached her knees) to 36 inches around. It is big enough for me to loop twice around my neck, and it will likely stretch out (the other one I knitted did) with wear, so it should drape nicely. The number of stitches cast on were 144, and I did six repeats of the pattern chart.

In other news, I had my hair done today for the first time in a year. Got it colored (got rid of some of those greys) and cut.  My stylist was this big burly Serbian dude, so that was unique. Gotta love Queens. Also my stylist and his assistant got into a fight (in Serbian) while the assistant was washing my hair. In the middle of the shampoo she dropped my head and stomped out of the salon. Uh. Ok. Also, while the cut is fine (you can see it in the photo above), my stylist decided to blow out my hair into a combination bouffant and Farah Fawcett flip, and then used approximately 15 pounds of hairspray on it to keep it in place. Which, yeah. SO not me. At all. In any way. Bruce said that I was looking very "Queens" after that. As soon as I got home I washed my hair, put nothing in it and let it air dry. The results of my lack of styling are what you see in the picture at the top of the post.

Needless to say, I likely won't be going back to that place. I have such a hard time finding stylists that I like. It's tough. And the ones I do like are generally WAY too expensive for my taste/budget.

Anyway. That's probably more than anyone wanted to know about my hair. And honestly, it'll probably be the last that you hear about it for quite a while.
Posted by Unknown 2 comments: Links to this post