I went downtown to have lunch with my friend Josh who happens to be in the energy industry. In a two-hour span, we managed to hit the following topics (and amazingly enough, discuss in depth): energy policy and its effect on society, culture and business, race, class, the baby boomer generation, Mad Men, The Geography of Bliss by Eric Weiner, farmers markets, localism vs. globalism, WWII vets, nanny states and their effect on human psyche, the seatbelt law, the presidencies and achievements of Obama, Bush II, Clinton, Bush I, Nixon, LBJ, JFK and Truman, Josh's trip to Asia, Georgia's trip to the ER, poverty in my neighborhood and in the rest of the world... I'm sure I'm missing a few subjects. (are you exhausted yet?) Anyway, it was awesome, as always.

I also took a few minutes to poke around City Hall Park. 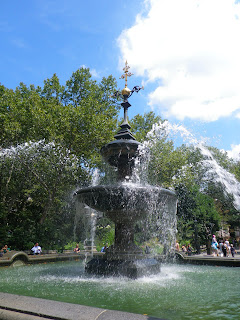 The lanterns around the fountain are actually gas lit. If you click to make the photo bigger you may be able to see the tiny flames. 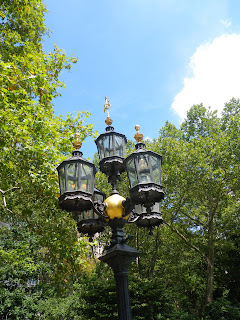 Some public art. I don't really care for this piece, but it did make some cool shadows: 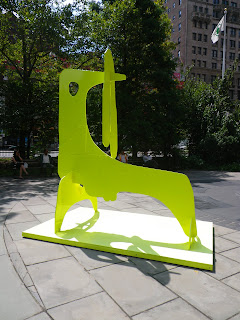 More public art (I liked this one): 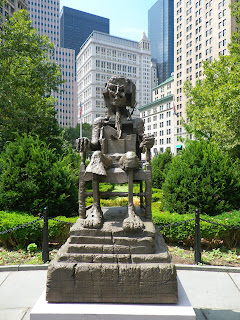 Closeup of the detail on the Woolworth Building (where Josh's office is. Lucky dog): 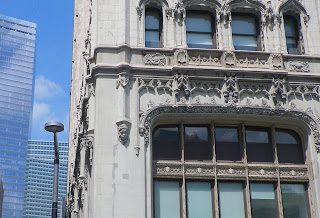 Cool skyscraper currently under construction. The cool thing about this is that the facade has some waves. At first I thought it was funky shadow, but when I got closer I realized that the facade itself is wavy: 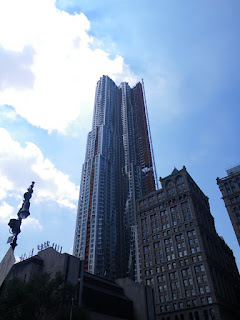 In knitting news, both the Travel Shawl and the Lettuce Pullover are coming along quite beautifully. I'm vastly enjoying both. Currently the Lettuce is my subway project, as I've been going downtown pretty much every day. The Travel Shawl is my Mad Men project. I still find the show to be a little bit cold, but it's sucking me in.

Also, I splurged a little this afternoon and picked up New England Knits by Cecily Glowik MacDonald and Melissa LaBarre (with a coupon, at Borders. Wow, that feels like a Clue game card: Mrs. Watson, Borders Bookstore, with a coupon):

Mostly because I really want to knit pretty much every single pattern in this book. And I have the yarn for quite a few of them in my stash already. So I think I have my entire winter knitting covered.
Posted by Virginia G