It's brave, it's new, it has knitting! 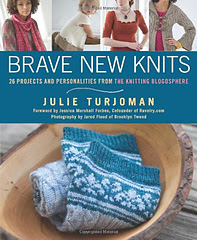 When I first heard about the book Brave New Knits by Julie Turjoman from somewhere (honestly, I think sometimes that I'm just somehow plugged into the knitting universe and things like new book releases just get downloaded instantly into my head) I was pretty darned excited, as it contains patters from folks like Ysolda, Jared Flood, Stefanie Japel, Norah Gaughan and tons of other famous folk (many of whom you can see in my blog roll at right). 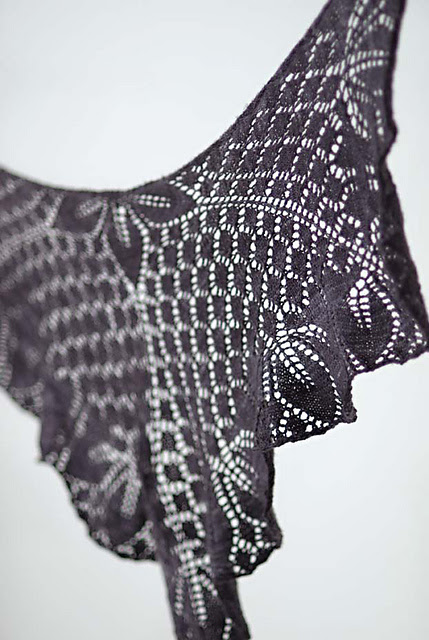 Orchid Thief Shawl by Ysolda
I gotta tell y'all, the book doesn't disappoint. There is a wide range of patterns in this book, including garments, hats, accessories, shawls and socks. The photography is by Jared Flood, which is instantly recognizable through the careful way the knitwear has been depicted and through his amazing use of light. Of 26 patterns, there are 11 that I would love to cast on for immediately, and another five that I will probably squeeze in at some point or another into my queue.

My only real complaint about the book is in the layout. I was a little annoyed that the title and basic information for each pattern is on the page preceding the photo. So you read the title, flip to the photo, flip back to see what yarn it is, flip to the photo, flip back to read the pattern notes, etc. Oh, and the knitting "blogosphere" vocabulary is a little irritating. Don't care, don't use the words, and for goodness sake, just f*$#in' shoot me if I ever write or say the word "squee." 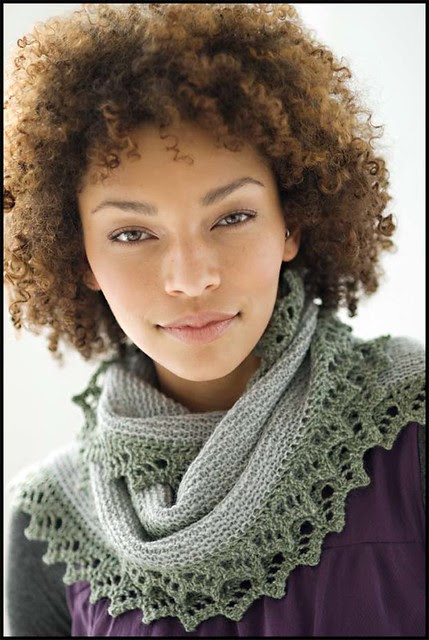 Aside from the patterns, one of the things I like the best about the book is the lengthy blogger profiles/interviews. These sections provide insight into the designers' processes and also give readers an idea of why these knitters got into blogging (and knitting, in some cases) in the first place. 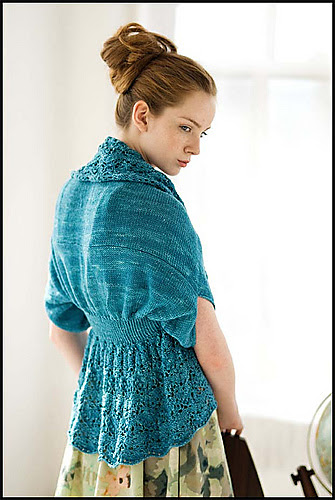 Last night I went to Knitty City to see the book's author, Julie Turjoman speak, and as it turns out, three designers from the book were there as well; Melissa Wehrle, Connie Chang Chinchio and Kristen Kapur. Melissa modeled her Origami Shrug: 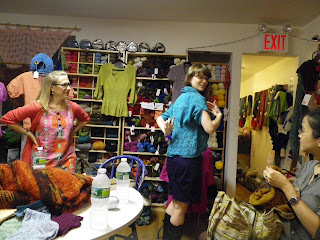 (That's Julie, Melissa and Connie, from left to right)

One of Melissa's knitting group members modeled it as well: 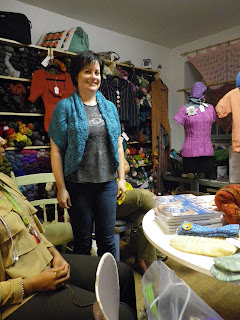 The even was lovely. Knitty City is hands down my favorite LYS in NYC. The owner and employees are some of the nicest people in town.

All of the garments from the book were hanging up in the store, and it was really nice to be able to try them on, feel the yarn, explore the construction and see them on a wide variety of body types. Of course, I had difficulty fitting into the sample sizes, because they are knitted to a size 34, and, well, I am not a 34.

I also had conversations with knitters there about fitting sweaters to my body type (rather hourglass shaped, with actual boobage. And a lot of it) and realized that a large part of the problem I've been having with sweaters is that I'm knitting to my bust measurement which makes the rest of the garment waaaaaaaaaaaaaaaaaaaaaaaay too big for me. So I probably need to knit a size or two down from my bust measurement and do a lot of short row shaping around the bustline.

I enjoyed hearing the inside story on the book and the designers from the author. I loved hearing about Melissa's design process and how she initially thought the garment had failed when she first made it. To hear an experienced designer talking about making mistakes was comforting for me, as I've been a little fearful about delving into the world of design due to my perfectionist nature. I realized I don't have to design a winner from the first moment I put pen to paper. Phew. Takes a little pressure off, you know?

Here's the group of luminaries who showed up for the event: 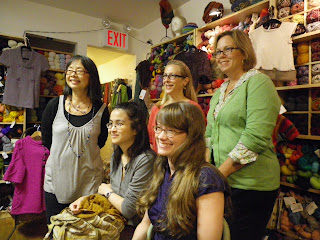 And as usual, my disclaimer: Nobody paid me to review this book, and I didn't receive a review copy (although it would AWESOME if publishers started sending me review copies, ahem) and I totally used the photos without permission (though I did give credit for them), except for the ones I took at the event. I asked myself for permission to use my own photos, and while I debated internally for about 30 seconds, sense (sort of) prevailed. And OMG. this entire post is so, like totally META. I mean, what? a knitting blogger, writing a knitting blog about a book about knitting bloggers? SQUEE!
Posted by Virginia G