Lots and lots of knitting time

After our incredibly long trek on Saturday, my little family was feeling pretty exhausted and decided to take it easy today. Bruce worked on his writing, which is awesome. Georgia and I played a bunch of the games that she got for her birthday, as well as made about 50 different kinds of art. She also took a three hour nap, which is a rarity now that she's turned 4.

This meant that I got quite a few hours of uninterrupted knitting time, and a few more hours of time split amongst knitting and various other things. WOO!

The Damson is almost done. I have less than 20 rows before it is complete, which is awesome. In the middle of row 89 I discovered a knot in the yarn and had to tink it back to the beginning and cut the knot out. That was a little frustrating. 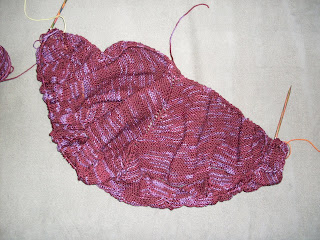 I'm about an inch into the featherweight, which is nice. It's easy knitting and highly enjoyable right now. 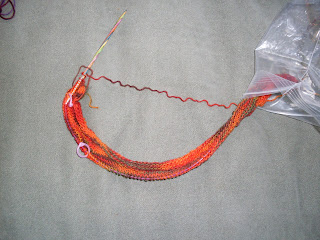 After about a week (maybe two) of thinking on it, I may be past the heartbreak and ready to figure out what I'm going to do. So we'll see if I'm up to the task of laddering up the dropped stitches or if I'm going to just rip the entire thing and start over. But it has been percolating and I'm ready to move on.
Posted by Virginia G